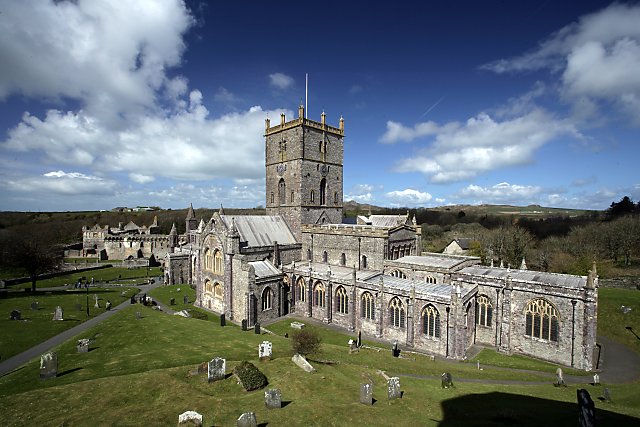 St David – the only native-born patron saint of the countries of Britain and Ireland.

He was born in a storm

Around the year 500, the grandson of the King of Ceredigion; his mother St Non gave birth to him on a Pembrokeshire clifftop during a fierce storm. The spot is marked by the ruins of St Non’s Chapel, and a nearby well is said to have healing powers.

He was a teetotal vegetarian

St David and his monks followed a simple, austere life. They ploughed the fields by hand rather than using oxen, and refrained from eating meat or drinking beer. St David himself was reputed to have consumed only leeks, bread and water, which is perhaps why the leek became a national symbol of Wales.

He was reputed to have performed miracles

The most famous of these miracles took place when he was preaching to a large crowd in Llanddewi Brefi, where it is said the ground on which he stood rose up to form a hill so that the people at the back could hear him speak.

He has his own flag

Many people mark St David’s Day by wearing a leek or daffodil, the national emblems of Wales, or by displaying the flag of St David, which features a yellow cross on a black background.

His legacy lives on

St David died on 1st March – St David’s Day – in 589. He was buried at the site of St Davids Cathedral, where his shrine was a popular place of pilgrimage throughout the middle ages. His last words to his followers came from a sermon he gave the previous Sunday: “Be joyful, keep the faith and do the little things that you have heard and seen me do.” The phrase “Gwnewch y pethau bychain mewn bywyd” “Do the little things in life” is still a well known maxim in Wales.